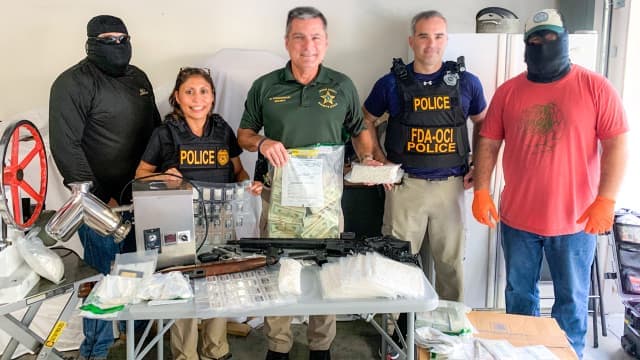 A Florida man will spend the next 36 months in prison for manufacturing counterfeit Xanax pills and distributing them over the Internet.

Benjamin Burdick, 55, of Inverness, Florida, was jailed for distributing hundreds of thousands of counterfeit Xanax pills over the Darkweb. Court documents showed that Burdick had used a seller account with Empire and Dark Market under the user name “Rangoon.” Burdick distributed at least 249,700 counterfeit Xanax pills through the now-defunct markets from April 2019 to October 2020.

The officials made several undercover purchases from “Rangoon” at Empire Market between June 2019 and May 2020. They ordered and received hundreds of counterfeit Xanax pills from “Rangoon.” The drug packages arrived in USPS Priority Mail Express envelopes. The packages bore return addresses registered to fake identities. Tests of the pills that investigators received revealed that the pills consisted of substances such as flualprazolam, etizolam, adinazolam, and microcrystalline cellulose.

Police learned that one of the return addresses used by “Rangoon” had received packages from a seller of microcrystalline cellulose. USPS records later showed that a package sent to the address by the vendor had been dropped off at a post office, where it was awaiting pickup. Surveillance set up at the post office showed that Burdick went to the post office on July 17, 2020, and picked up the package.

The investigators later set up surveillance at Burdick’s residence and installed a GPS tracker on his vehicle. On August 10, 2020, the GPS tracker showed Burdick drove to a Tampa post office. There, he dropped off 56 drug packages. Officials seized one of the packages, which was addressed to a Virginia resident.

Police then interviewed the recipient of the package on Aug. 14, 2020, and the recipient allowed them to open the package, and they reportedly found 11 Xanax pills that later tested positive for flualprazolam and microcrystalline cellulose. The recipient admitted that he had purchased the pills from “Rangoon” at Empire Market.

An undercover agent ordered 50 Xanax pills from “Rangoon” at Dark Market on August 26, 2020. The agent received the drug package on September 1, 2020. The package contained 53 pills that tested positive for flualprazolam.

USPS records showed the package had been mailed from a post office in Inverness on Aug. 26, 2020. A review of surveillance footage from Burdick’s residence showed that on the afternoon of Aug. 26, Burdick placed a box full of USPS Priority Mail envelopes in the back seat of his vehicle and drove away. A check of the GPS tracker installed in Burdick’s vehicle revealed that Burdick drove to the post office in Inverness.

Further surveillance showed that Burdick repeatedly drove to post offices to drop off or pick up packages.

Investigators executed a search warrant at Burdick’s residence on Oct. 14, 2020. During the search, a pill press machine, a powder mixing machine, bags of microcrystalline cellulose, more than 16,000 pills, and shipping and packaging materials were seized. Investigators also seized nearly $150,000 in cash, several firearms and counterfeit driver’s licenses with Burdick’s photos.

Burdick was arrested at the conclusion of the search along with 30-year-old Catilynkyrie Burdick. Burdick was sentenced to three years in prison on August 24, 2021.