Market of the Week: Vice City 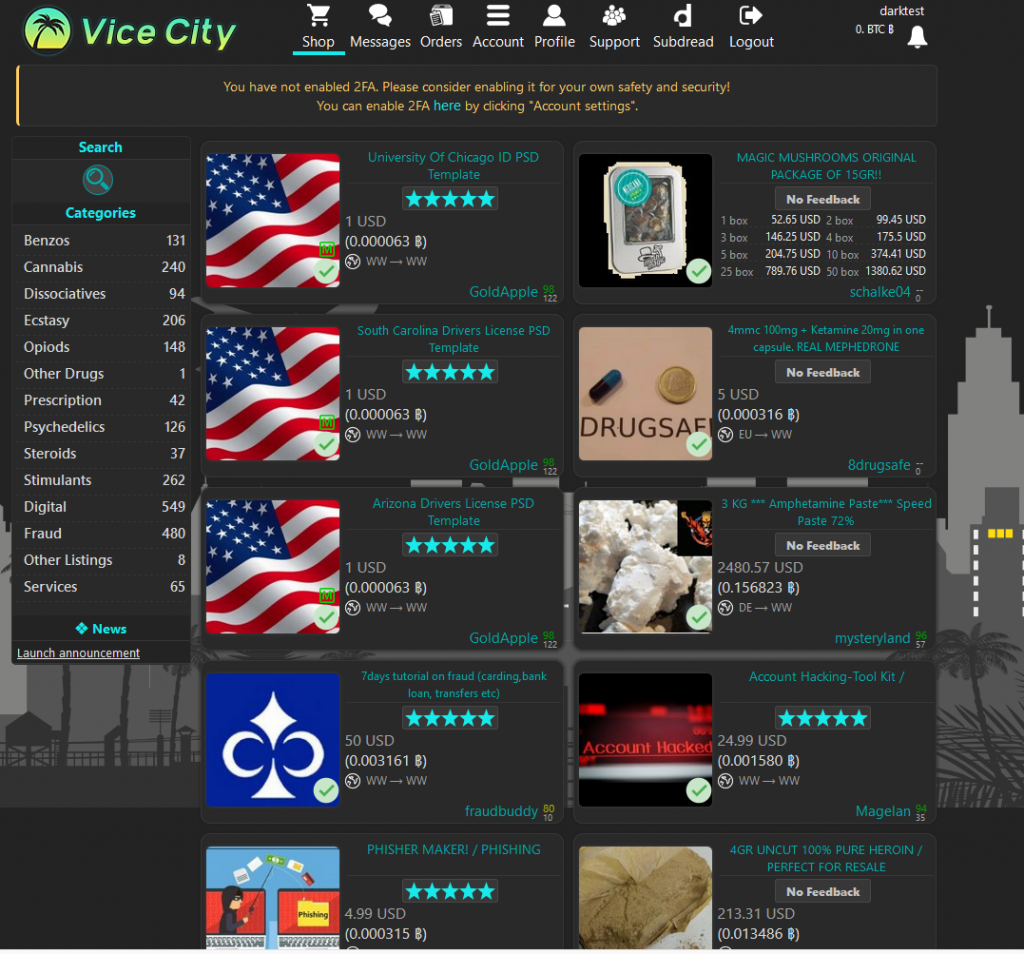 This is our first article in a new weekly series tailored for casual and frequent darknet shoppers alike. We will feature markets like Vice City Market that stand out for exceptional features or recent improvements. We will focus on both new and also established markets and also respect the various categories like generic markets, card shops, etc.

Leading off this series we feature Vice City Market as our first market of the week. This is not because of any recent improvements or new features but rather because in the recent years Vice City has become one of the most prominent and reliable markets with almost zero downtime. For that reason we consider it a worthy first entry.

For new users in the darknet market scene it may sound surprising that Vice City is actually a relatively new market. It was created in 2020 but since then it quickly became one of the most popular markets. In part this was helped by the fact that many of the competition sites like Alphabay had temporary issues or outright died. Vice City in the meantime rarely had any downtime and was always quick and reliable and thus became one of the most popular traditional generic darknet markets within just two years.

Since the site launched in 2020 it quickly gained a reputation for its “flawless coding” of the site, they even offered high rewards to users who could find holes in the site. Vice City has a large community and there are over 9,000 listings active worldwide. The site keeps vendors clean by ensuring any inactive accounts are removed after a month. The site’s security checks all the boxes with 2FA, PGP encryption, and Multisig Payments, though they do not currently accept Monero as a payment method.

Vice City started with just a few categories but in the last two years it has grown its product portfolio more and more. The biggest categories are:

While Vice City is mostly tailored on drugs and medication it also lists several other items.

Why you should prefer Vice City Market

Because of its stability and reliability in the recent years many vendors have decided to rely exclusively on this marketplace for selling their goods. That means that especially in the drug categories Vice City Market often offers cheaper prices than any other darknet market site. Secondly because of its outstanding track record of stability, the chances of a sudden exit scam are low. The site administrators always managed to run the site without any drama or public exposure – it just works. This not only attracts buyers but also the best and most reliable sellers. There is very little risk of ever not getting a product you ordered on Vice City.

That being said, Vice City Market does not offer every type of category. So if you are looking for niche products or special digital items, check out or guide Best Darknet Markets of 2022 for some alternatives.