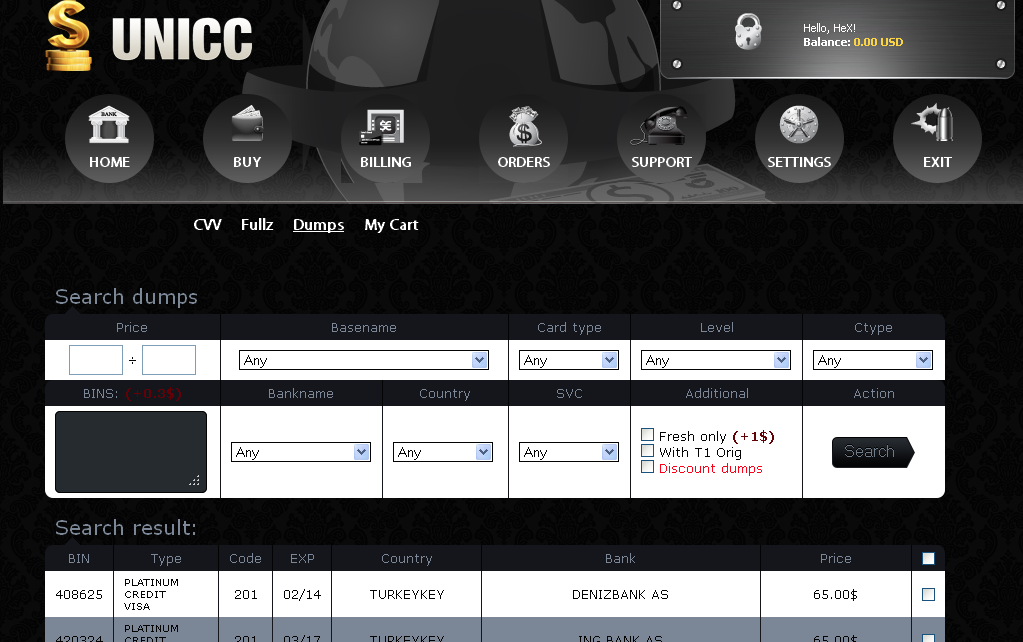 One of the oldest, and renowned dark web marketplaces, UniCC, has decided to end its operations. This is going to be a very big blow to carding kings who relied on the market. Having opened its doors in 2013, UniCC was arguably the biggest carding platform on the dark web.

According to information reaching this publication, the carding platform has announced its retirement after generating a whopping $358 million in sales. Considering that the site has been in operation for more than 7 years, this could even be less than the actual value.

UniCC’s retirement comes at a time when its brother LuxSocks is also pulling the plug. This move is going to leave an insignificant void in the dark web carding market. Most of the dealers operating on UniCC could have switched their attention to LuxSocks. But now that both of them seem to be winding up, it’s a double tragedy. But because they’re ‘brothers’ which seems to be under one operation, it’s likely to be a done deal. There’s no turning back at this point in time.

Carding sites and their activities

Now, most carding sites operate on the dark web due to the anonymity and high level of secrecy on this side of the web. So they’re basically dark web platforms. In these platforms, operators and dealers sell credit/debit card details obtained by hackers during cybercrime attacks or related hacking incidents. Hackers use various techniques to obtain this information. For example, they can use credit card skimmers that infect legitimate websites or malware planted in PoS terminals.

Fraudsters buy this information and exploit it by making fraudulent online purchases or forging clone cards to withdraw cash directly from ATMs.

Just a year ago, the most successful carding site to ever enter the market, Joker’s Stash voluntarily ended its operations after having made sales worth $400 million. And being that Joker’s Stash never dealt in drugs or any other thing apart from carding, all this is purely from cards.

According to information obtained online, the carding field had been dominated by UniCC since Joker’s Stash retirement. The dark web marketplace reportedly received huge sums of money in Bitcoin, Litcoin, Ether, and Dash as payments from the sales of stolen payment card information by its members.

To really understand that UniCC was a big player and has left a very huge gap in the carding market, it’s rumoured that the platform owned and controlled more than 30% of the entire market. So you can imagine how big it was. Let’s say this was the eBay of stolen cards.

The management posted the retirement message on different dark web forums on 13/1/2021. The notice which was posted in both English and Russian language read in part; “Our team retires.”

It continued, “Thanks to everyone who has been part of us for years. To loyal partners, clients, and colleagues who assisted us in many ways, I would separately thank each one but it is not professional. If I or some of our team members failed your expectations – we [are] truly sorry.”

In the post, they went ahead to give reasons for the market’s closure. And the age and health of the market are some of the factors that contributed to the closure according to the notice.

“Don’t build any conspiracy theories about us leaving. It is weighted decision, we are not young and our health do not allow to work like this any longer.”

The team then warned users to clear everything and wrap up within 10 days. Within this period, users should clear businesses and accounts before the platform, alongside its affiliate domain — LuxSocks — closes.

“We ask you to be smart and not follow any fakes tied to our comeback and other things,” the operators further said.
Analysis conducted by Various Experts

According to estimates online, the market has facilitated the sale of $358 million worth of illicit material, with tens of thousands of new cards being added to its platform every day.

Elliptic particularly said that the site has generated lots of money through cryptocurrency.

“Tens of thousands of new cards were listed for sale on the market each day, and it was known for having many different vendors — with the fierce competition keeping prices relatively low,” Elliptic said.

“As UniCC retires, focus will now be on who emerges as the main successor. The carding market overall recently surpassed more than $1.4 billion in sales with Bitcoin alone. Meanwhile, the operators behind UniCC will be seeking to cash out their formidable profits,” they added.

According to an intelligence manager at the UK National Crime Agency (NCA) Mr Alex Hudson, the closure has created “mixed” feelings. As much as the operators have left the industry, and the potential pool of tradeable stolen data has shrunk slightly, it may also feel like unfinished business.

“If there is a regret, it’s that we do need to hold them accountable for it and they need to understand that they will still be held accountable,” Hudson commented.

Last year February became one of the most significant periods in the history of carding. Joker’s Stash, the largest carding forum to ever step its foot in the market, called it quits.

Joker’s Stash is one of the pioneers of carding. The platform oversaw the trade and sale of stolen payment card data for a period of not less than seven years. However, following the seizure of a number of domains used by Joker’s Stash several months prior — and the apparent hospitalization of the operator due to COVID-19 — the service closed.
Now, Joker’s Stash is one of the underground marketplaces that successfully evaded being taken down by the law enforcement agencies throughout the years it was in operation. This was mainly possible through smart decentralized methods. The site was available through the use of blockchain DNS. Blockchain DNS is a decentralized DNS service that needs the installation of a browser plugin in order to access non-standard top-level domains (TLD), such as ‘.bit’, ‘.lib’, ‘.emc’, ‘.coin’ and ‘.bazar’.

It’s these censorship that play a major role in preventing censorship or takedown activities such as law enforcement agencies compelling ISPs to a sinkhole or redirect the sites. So in terms of management and security, operators of Joker’s Stash knew how to play their game right.

A few weeks in October 2020 before it’s closure in 2021 January, Joker’s Stash’s administrator announced that he had contracted Covid 19 and was hospitalized for a week before being in self isolation. And since the Covid 19 affected businesses world wide, it’s not wrong to state that it might have been the reason for the closure of this market. Covid even affected trade on the dark web.

So dark web enthusiasts and researchers believe that this is one of the reasons as to why the market was eventually shut down in 2021 January. Other reasons might have been there, but Covid was a major factor. Initially before the closure, there were maintenance issues and the customers complained that the shop’s payment card data quality was incredibly poor. So during this period, there had been management issues, and people who know the trends and how these markets operate must have seen this coming.

On January 15,2021, the market through its administrator confirmed the rumours. He announced that the market will be shutting down on February, 15, 2021, a month after the announcement. In their retirement message, they said; “It’s time for us to leave forever”. They further advised their users to spend account balances and not to have hopes in opening in the future. They emphasized that they “will never open again! Do not trust possible future imposters”.

Joker’s Stash retired peacefully, and even though a few issues were later reported, most of the users were satisfied with the operations from the start, upto the end.

So a year later UniCC also decided to down its tools. UniCX was undoubtedly the only market that could equal Jokers Stash, and now that it’s on its deathbed, users have a reason to be worried. It’s true other markets will emerge to try and take control but it will take time for any of them to fill the position left by these giants.

A Winter of Dark Web Retirements

The year 2021 was not a very good year for dark web marketplaces. After Joker’s Stash retired in January, several other marketplaces also called it quits. This may be due to a series of problems, some of which are not known, but the closure of the markets itself is proof that something wasn’t perfect somewhere. The Covid 19 undoubtedly played a major role.

In October 2021, White House Market – the largest darknet market of its kind – announced that it would shut down. Cannazone followed in November and ToRReZ in December. In January 2022, Monopoly market became inaccessible in a possible exit scam.

So we can say the wave of recent departures might have triggered UniCC’s retirement. The operators either see it as an opportunity to run away with customers’ funds or just retire peacefully to avoid more interference from the authorities.

Nevertheless, the carding market, just like any other dark web market has also seen numerous new entrants into the game. The notable one is All World Cards which made headlines in June 2021 by offering almost three million cards for free in an early publicity stunt.

As UniCC retires, attention is going to be given on who emerges as the new market controller. The carding market recently surpassed more than $1.4 billion in sales with Bitcoin alone.

As we’ve said earlier, it’s been the norm, that when dark web sites retire, they often disappear with customer’s money. This is what is known as an exit scam in dark web language. On other occasions, they might be hacked, or busted by the authorities and shut down. Infact, the majority of the dark web forums usually close due to scams, followed by voluntary retirement and crackdown by the authorities.

Now, the new trend of marketplaces winding up in an orderly fashion, and it wasn’t the trend a few years back. It’s known as “sunsetting”, or “voluntary retirement.”

“Right now it seems to be happening more. Markets gracefully exit and say, ‘We’ve made enough money, and before we get caught, we’re just going to retire and go into the sunset,” says Prof David Décary-Hétu, a criminologist at the University of Montreal.

According to Prof David Décary-Hétu, administrators running large dark web marketplaces can pocket close to $100,000 in a day in commission fees. If they also double up as vendors, they can even earn twice the amount. So most people have realised this is a luxurious and most profitable operation and that’s why they hide on the dark web to undertake it. The authorities also spend the better part of the day trying to hunt down these operators.

Well, stolen credit cards are sold on these dark web forums such as UniCC in exchange for cryptocurrency. The cards usually have a value, and can be used to buy items, or even gift cards which can again be sold for higher profits. They can also be used to launder cryptocurrency obtained through other types of cyber attacks.

UniCC’s leaders may have seen an opportunity to run away with users’ money even though they promised that such a thing would not happen. They may have also reached such a decision to run away from the law enforcement agencies. It’s a matter of time before we see what elapses at long last.

But then, even as legendary marketplaces keep on closing,new ones are already emerging. All World Cards is a perfect example.

Finally, any trader on these marketplaces that are shutting down should just be on the watch. Anything could happen at any time. Exit scams haven’t been witnessed for some time now, but that doesn’t mean it can’t happen again. Otherwise thanks for reading this article.