The Rise And Fall Of White House Marketplace 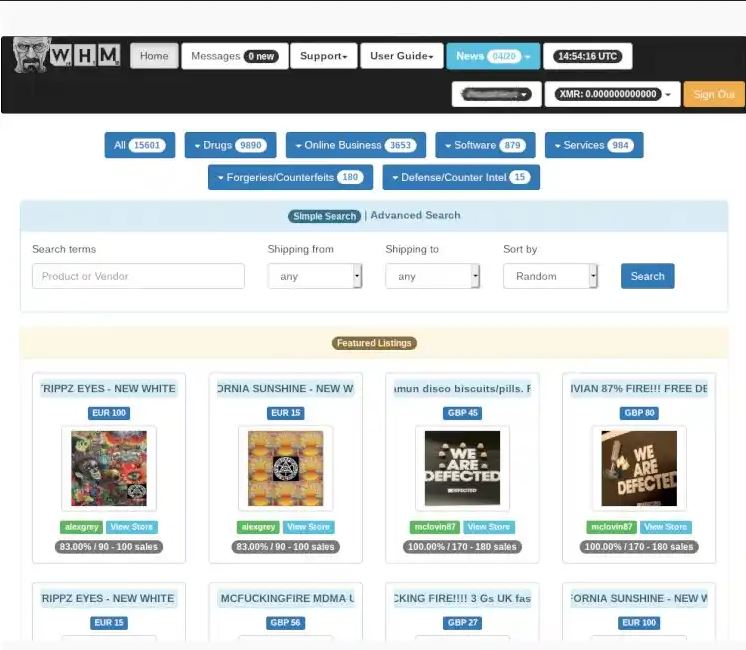 When you come across any list mentioning the best marketplaces that ever operated on the dark web, the White House Marketplace must just appear. Over the period it was in operation, the White House Marketplace literally controlled trade on the dark web. The market was launched in 2019 and it only operated for two years before being shut down ceremoniously at the end of 2021. But how did such a marketplace come to be, and what led to its closure? Well, stay tuned.

WHM is one of the latest dark web marketplaces that made headlines after announcing it’s retirement. The market was home to drugs, fraud related services and all kinds of software services. The giant has rested after operating for a very short period, something which has left analysts and most dark web users speechless. In view of the security features and all factors put constant, people expected something better than this from WHM.

The WHM was known in the dark web for its strong security practices and it ensured a high operational security level. The market exposed all communications via PGP. Moreover, the market accepted payments strictly through cryptocurrency, particularly Monero.

They required all users to disable JavaScript in Tor browsers before visiting the marketplace. More so, they were famous for their strong moderation team. The team helped resolve disputes. This enabled the site to gain trust with both sellers and buyers alike.

Entry Into The Market

The White House Dark Web Marketplace, accessible only through the Tor browser, was launched in February 2019, just a few months before Walk Street exited the market. The brains behind this marketplace still remains unidentified upto this date, unlike the case of Silk Road where the founder, Ross Ulbricht, was traced by the authorities and later identified.

This marketplace, similar to other dark web forums, operated like eBay or Amazon. And by Sep 2020, it became the biggest marketplace on the Dark Web after the Empire market’s exit. In Feb 2021, it boasted half a million registered members. The operators made more than $100,000 per day in commission from sales.

The market’s faster growth is mainly attributed to it’s robust security feature. It helped the market fit in the gap created in mid-2019 and 2020. The void which emerged after the Empire Market shut down. Also, the Dream Market exit scam created a gap in the market. Furthermore, they gained from the Valhalla and the Wall Street Market takedown.

Now, The White House Market advertised a wealth of products. Still, it was mainly known for its narcotics section. Most sellers in the marketplace operated across European territories. The site also traded other products. These include malware, carding, and counterfeiting-related services. It also sold military-grade gear like body armor, weapons, and jamming equipment. According to The Record, they also dealt with communications gear.

At the time of it’s closure, the market boasted more than 49,000 active listings and over 3,500 active sellers. Moreover, White House Market had a whooping 819,490 order feedback. So the statistics clearly shows how gigantic the market was. Despite never reaching the peak trading volumes of its more-famous cousins Silk Road and AlphaBay, White House Market had established itself as one of the most popular—and secure—markets on the dark web. So when WHM unexpectedly closed on October 1 2021, it came as a shock to the platform’s dedicated user base. Their retirement will leave a significant hole in the darknet market economy.

Features of White House Market That Set it Apart

As we said in the earlier stages of this article, the White House Marketplace had some striking features that made it the go-to for every dark web user. The site offered it’s users more than enough to keep up with.
Like it’s dark web counterparts, the site offered the basic elements of a dark web marketplace. Even so, with increased security operations by the law enforcement agencies, there are additional fundamental features one should consider before venturing into the black market and these include PGP and 2-factor authentication. White House Market never left any single loophole when it came to these two features. Below are additional features of the market that made it outstanding;

There was a rumble in the dark web scene on October 1st, 2021 when the White House Marketplace formally declared it’s retirement. Most people, especially it’s users, couldn’t believe this. But the “we are retiring” message was so real that you had to just accept.

“We have reached our goal, and now, according to plan, it’s time for us to retire.” These were the administrator’s words on their homepage. Also, they used the exact words in a dread thread. As usual, they used their GPG key to sign the message cryptographically.

It has been a culture that most dark web markets run away with user funds once they resolve to shut down. A crime commonly referred to as an exit scam. Moreover, some even go offline after a law enforcement raid. But the White House Market had an honorable exit. They’ve just done it a little differently. The WHM graciously left the black market while finalizing orders. This is uncommon in the black market, to say the least.

The WHM therefore disabled new account registrations with its retirement. Additionally, it disabled the posting of new listings. These changes occurred following their announcement. Again, the operators also informed the vendors of the necessities. They told the sellers to get ready to move their listings.

“Thanks everybody for your business, trust, support, and of course for placing decent amounts of money in our pockets. We may come back sometime in the future with a different project, or we may not. Meanwhile, be on the lookout for phishing or copycats; if it’s not signed by us, it’s not us.”

Fortunately, WHM’s goodbye message left some clues. It suggested some select types of dark web markets for its users. They commented:

“…any market can disappear at any time and for whatever reason (exit scam, law enforcement operation, hack, technical issue and so on), but markets like Monopoly (true wallet-less, direct deal) and AlphaBay (enforced multisig) greatly minimize damage. You can also give a chance to new markets; we all have to start somewhere.”

Adding to WHM’s recommendation, the AlphaBay market has gained popularity. The marketplace experienced an abrupt revival last year. The AlphaBay market was a prevalent market from 2014 to 2017. However, the market disappeared after a raid by the law enforcement agencies. The authorities tracked down the site’s operators. Moreover, they accessed the servers that hosted the market.

But DeSnake, AlphaBay’s ex-administrator, relaunched the famous darknet marketplace mid last year. And WHM’s retirement has truly given it the push it needed to reclaim its throne–Just like some Dread users predicted a few weeks back.
After White House Marketplace announced it’s retirement, analysts attributed the rise of the market to the fall of DarkMarket. They experienced the market’s rise as foreseen. However, the WHM has now retired. So, which market is going to climb the ladder and become the new leader of the black marketplace? Well, a few giants have already shown signs. Let’s wait and see who carries the day.