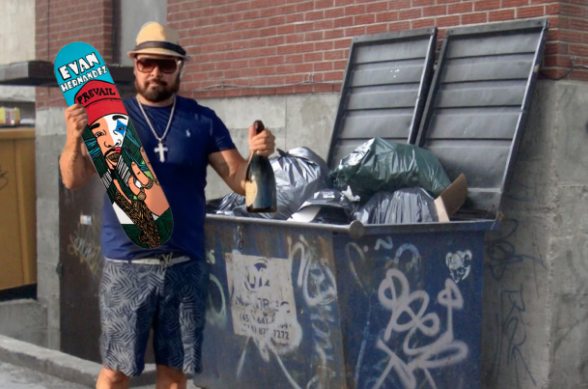 Professional skater Evan Hernandez is facing over 8-years of prison time after pleading guilty to selling crystal methamphetamine and using Bitcoin to launder funds. The skater was a friend of rapper Lil Wayne and was sponsored by Lil Wayne’s clothing line, Truckfit. However, Hernandez had clearly developed an interest in other businesses

Hernandez was given a 97-month sentence by US District Judge David O. Carter. The trial concluded back in June 2021, after Hernandez pleaded guilty. Hernandez admitted to one charge of distribution of methamphetamines, and one charge of laundering money instruments in the form of Bitcoin. During the proceedings, the court held evidence of Hernandez’s dealings going back to late 2018. According to the report, they traced some of the meth Hernandez sold to convicted darknet vendors William (Billy) Glarner IV, who was apprehended in 2019, and Brian Vancleave, who is still on trial.

Along with the 97-month prison sentence, the court ordered Hernandez to forfeit $35,000 in cash, a Mercedes-Benz vehicle, and various other items such as watches, rings, and necklaces.

Who is Evan Hernandez?

Evan Jaime Hernandez was a professional skater back in the 2000’s. His career started at a young age, at just 14 years old, Hernandez was sponsored by a leading skaters’ brand, “Baker”. Hernandez was a street skater who quickly picked up his career and remained on the professional scene for about 10 years. In late 2007, Hernandez was dropped from the Baker team due to sustaining multiple injuries. This impacted his influence and his performance drastically.

Although Hernandez fell off the pro-skating scene, he did not stop pushing to become one of the best. In 2016, Hernandez partnered with close friend Lil Wayne and gained Young Money’s clothing line “Trukfit” as a sponsor. He also started his own brand known as “Prevail” that focused on skateboard decks. In recent years, although he kept these sponsors, it seems that Hernandez shifted his focus on a more profitable business.

Investigations into Hernandez date back to 2018 when an undercover agent helped Hernandez launder Bitcoin and turn it into cash, Hernandez found the agent through a darknet marketplace. The agent worked with Hernandez four times and transferred over $170,000.

Reports from the trial had evidence that Hernandez supplied darknet vendors with large amounts of meth and possibly other drugs. Hernandez is said to have supplied convicted darknet vendor William Glarner IV, also known as “Billy.”Glarner was captured and tried back in 2019. The court found Hernandez to be Glarner’s main supplier. Glarner and his father ran three vendor accounts through different marketplaces and racked up at least 1,500 sales. The duo were captured and sentenced by the same US District Judge, David O. Carter.

Some of Hernandez’s sales trace back to another darknet vendor, Brian Vancleave, though there is not as much information on this trial as it is still underway.

Further investigations into Hernandez include evidence that Hernandez was not just a supplier but also ran his own vendor account. In March 2018, a $5,000 deal for two pounds of crystal meth was sold to another undercover Homeland Security Federal Agent. The prosecutor claimed that “Hernandez was involved in a highly sophisticated drug-trafficking operation, where he personally took on various roles to ensure its success: obtaining multiple types of narcotics, selling them directly to customers, and laundering money on the backend in a sophisticated manner.”

After Hernandez’s arrest, the prosecutors received a warrant to search Hernandez’s properties. One of which was a stash house that contained equipment used to make methamphetamine, multiple vacuum-sealed bags, United States Postal Service mailing labels, and Federal Express envelopes. The agents recovered almost 7 kg of meth. Although no information was released regarding vendor accounts that Hernandez ran himself, there is a good possibility that he had his own vendor shops.
The court archive mentioned that Hernandez may have had partners or worked with a gang, though there is no solid evidence for this currently. The trial concluded in June 2021, and while Hernandez had a promising future as a skater in his youth, this opportunity has been lost as the 37-year old will be spending the next eight years behind bars.