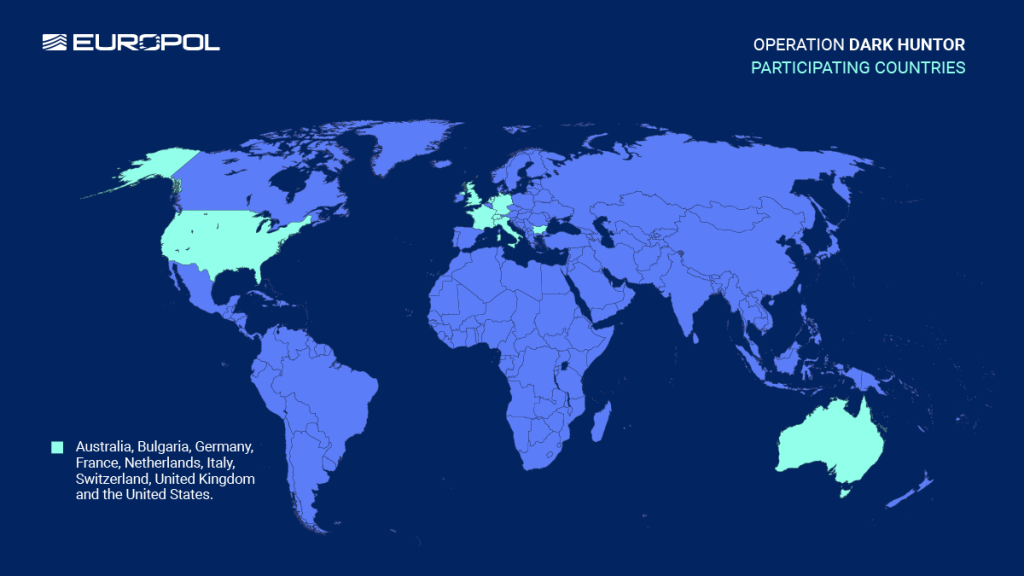 Under the operation “Dark HunTOR“, police forces around the globe have arrested 150 suspects involved in buying or selling illegal goods on the dark web in a coordinated international operation involving nine countries.

More than EUR 26.7 million (USD 31 million) in cash and virtual currencies, as well as 234 kg of drugs and 45 firearms were seized during the operation. The drugs seized included 152 kg of amphetamine, 27 kg of opioids and over 25 000 ecstasy pills.

Operation Dark HunTOR consisted of a series of separate but complementary operations in Australia, Bulgaria, France, Germany, Italy, the Netherlands, Switzerland, the United Kingdom and the United States, coordinated by Europol and Eurojust.

Operation Dark HunTOR stems from the dismantling of DarkMarket, the world’s largest illegal marketplace on the dark web at the time, earlier this year. At the time, German authorities arrested the suspected operator of the marketplace and seized the criminal infrastructure, providing investigators around the world with a wealth of evidence. Europol’s European Cybercrime Centre (EC3) has since put together information packages to identify the main targets.

As a result, 150 sellers and buyers involved in tens of thousands of sales of illegal goods have been arrested across Europe and the United States. Some of these suspects were classified as “high-value targets” by Europol.

These arrests were made in the United States (65), Germany (47), the United Kingdom (24), Italy (4), the Netherlands (4), France (3), Switzerland (2) and Bulgaria (1). A number of investigations are still ongoing to identify more people behind dark web accounts.

As part of this operation, the Italian authorities also shut down the DeepSea and Berlusconi dark web marketplaces, which together offered over 100,000 illegal products. Four administrators were arrested and €3.6 million in cryptocurrencies were seized.