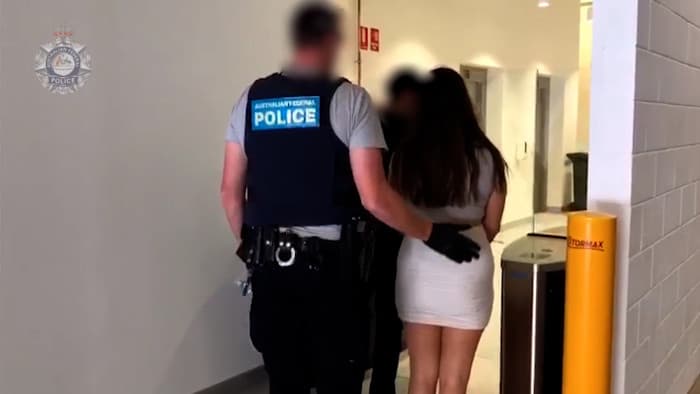 Two people are expected to face Perth Magistrates Court today (19 October 2021) charged over the alleged importation of 18 kilograms of methamphetamine to Western Australia in a plastic container of black paste described as wall coating.

Australian Federal Police and Australian Border Force officers arrested a woman and a man yesterday (18 October) after they allegedly cut open the blue plastic tub to access the illicit drugs they expected to find. Police will allege the 31-year-old woman had earlier collected the package from a short stay apartment in Scarborough, where it had been delivered.

She then met up with a 32-year-old man, before the pair took the package to a Willetton home. AFP and ABF officers arrested the man and woman yesterday afternoon as they tried to drive away from the residence. Police then searched the home and allegedly found black paste from the container in a pile on the bedroom floor and other items from the consignment in the backyard.

The man and woman were last night each charged with attempt to possess a commercial quantity of a border controlled drug, contrary to section 307.5 of the Criminal Code Act 1995 (Cth).

The offence carries a maximum penalty of life imprisonment. The arrests are the result of an AFP investigation launched on 6 October (2021), after ABF officers at the Perth international mail facility examined and intercepted the package, which had been sent from the United States.

An x-ray allegedly showed inconsistences and two narcotic-detection dogs also gave a positive reaction to the consignment. Tests on the thick black paste in the plastic tub allegedly returned a presumptive positive result for methamphetamine.

AFP forensic officers substituted the container for one without illicit drugs and the package was delivered to Scarborough, where the woman allegedly collected it. Western Australia Police Force also supported the investigation.

AFP Acting Sergeant Mat Glare said investigations into the importation remain ongoing to identify other people allegedly involved in the importation and planned distribution. “Methamphetamine is a highly-addictive drug, which can directly lead to violence and mental health issues, and the demand for it results in property crime and other offences by addicts trying to fund their next hit,” he said.

“That’s why it is important we stop it from reaching our communities and disrupt anyone trying to profit from its distribution.” Approximately 18 kilograms of methamphetamine could have been sold to 180,000 people in ‘street level’ deals and netted approximately $18 million for those involved in the distribution.

AFP Acting Sgt Glare said the drugs were mixed in the black paste and would have needed to be extracted by a chemical process, which would likely have been done in an un-sanitary, home laboratory. “We urge people who use meth to think about the violence in the supply chain and the disgusting conditions in which it is made and transported.”

ABF Commander Shaun Senior emphasised the continued efforts of the ABF to systematically disrupt criminal attempts to import narcotics into Australia, despite the border-related challenges of the ongoing pandemic.