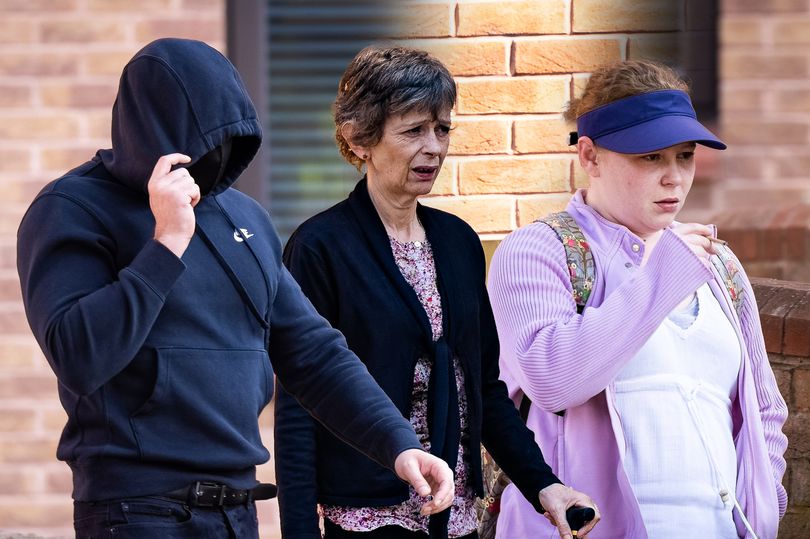 The 32-year-old, from Alvaston, dismantled the wholesale quantities, repackaged them and sent them in smaller quantities by post to customers she found via the dark web.

Her mother Penny Douglas, who the hearing found smoked cannabis to alleviate health problems, knew what was going on and allowed her Warren Street address to be used for that purpose.
And Emma Douglas’ partner in the illegal business, Adrian Grundy, rudely stuck out his middle finger to our cameras as he tried to conceal his identity after all three were given suspended sentences.

Clerk William Harbage QC said: ‘They were all involved to a greater or lesser extent in the supply of drugs. “Penny Douglas, you admitted it in your home, Emma Douglas and Adrian Grundy, you sold by post to customers you had contacted online rather than on the street.

“But there has been a significant delay in bringing charges, which is unfortunate and makes the administration of justice extremely difficult.” Siward James-Moore, prosecuting, said customs officers intercepted the 1 kg cannabis package at the airport on May 25, 2017.

He said a warrant was issued at Douglas’ address and more drugs were discovered.
Mr James-Moore said: “There was cannabis, cocaine and amphetamine in one bedroom. “There were packaging boxes and labels and three digital scales.”
He said the 1kg cannabis package intercepted could have been worth up to £10,000 and there was a further 1.5kg loose in the bedroom.

Mr James-Moore said the cocaine could be worth up to £8,000 and that Emma Douglas and Grundy’s fingerprints were on the drugs and packaging. He said: “Evidence on their cell phones showed they were using a postal service to sell the drugs over the dark web. “There were conversations between them in which they talked about negative feedback they had received online and about other competitors.

Emma Douglas pleaded guilty to conspiracy to supply cannabis, cocaine and amphetamine.
She was sentenced to 18 months in prison, suspended for two years and given a three-month curfew. Penny Douglas, 54, pleaded guilty to delivery of cannabis and was sentenced to five months in prison, suspended for one year, with a 12-month curfew.