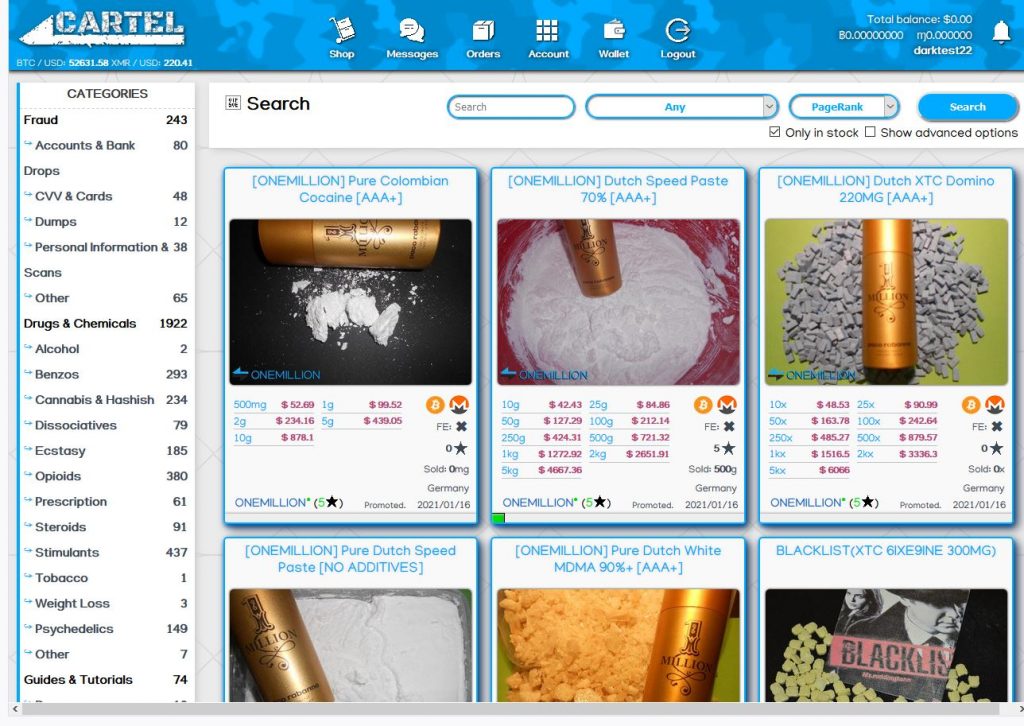 Since October 2021 a trend of markets retiring started. First White House Market, then Cannazon, and finally Torrez. This was a pleasure to its users as they all left without an exit scam and gave opportunities for users to gather their funds.

Torrez Finally closed its doors on December 30, 2021. Two other marketplaces however were less lucky, and their users have possibly experienced an exit scam, or their markets have been seized.

What is happening here? Two Markets Go Down On The Same Day

Two popular darknet marketplaces went offline on December 29th, 2021. At first, it seemed like the site crashed due to DDoS attacks, however, weeks later the markets are still down. Staff members from both sites have come forward saying that they have not heard from the Admin of the marketplace. They have lost access to the backend of the site and signs point to the possibility of exit scams.

On Friday 29, December several darknet marketplaces experienced a DDoS attack. DDoS attacks happen regularly as larger markets do not want smaller markets or competing markets to succeed.
Many markets went down however most returned and swiftly returned to their usual business, it was at this point where people became weary of 2 markets that remained offline. Monopoly Market and Cartel Market.

Monopoly Market uses a “userless” and a “wallet less” system. This meant that no data was held on individual users and that users do not add funds to a site wallet. This is a completely different system to most online markets. The way Monopoly earns its money is through Vendor Bonds through commission from sales. Users pay directly to the vendor and the vendor will send through the commission after the deals are completed.

The site is very picky with its Vendors and only works with already known and trusted vendors. Because there are not many funds to be scammed, its users believe something else is at play. The day before the site went down, the site’s head admin went on a rampage on the subdread d/monopoly. He reacted to some trolls and users complaining about the site.

Using the recognized u/MonopolyOfficial username, the admin posted “I am deleting all of these bullshit posts so we can keep the discussion in 1 thread, I am making a note of the links so everybody can see them and I will be going through them when I have looked into the market as that is a priority.”

One user on dread speculates that it could be an unplanned ‘exit scam’ or something else has happened to the admin.
“I’m going to be honest, I am not 100% sure this was a planned exit scam. I mean, we all know the dude was… partial, to say the least, to hard stimulants, and I don’t mean caffeine. Take a look at his most recent comments and tell me it doesn’t strike you as a guy, either stimmed out of his mind or going through the worst case of meth psychosis known to man, who’s accidentally either fucked something important right up and doesn’t want to admit it, or got fucked by someone else.
In my opinion, it probably wasn’t an exit at the beginning… but of course, he could still make it one.”

Patrick Shortis, well known covert network and darknet market researcher, spoke about Monopoly going offline in a tweet saying “It seems I missed it over the New Year but Monopoly Market has been down for almost a week now. Admin claims it will be back, users are suggesting everything from exit scam to server seizure.”

It is sad to see this unique site fall. Time will tell what has happened, and there is still a chance it will return, however, it is likely that many users will not return.

Cartel Market is down, and it’s looking bad

Cartel Market’s been down since December 29th and its admin has been offline too. The possibility of this playing out as an exit scam is much higher. A few hours after the site went down, a Cartel staff member informed its members on the dread that Cartel market is down. The staff member u/Ryuu claimed “So I can’t give too many details about this, but yes there is a huge DDoS attack, you can expect the market to come back on Monday. It’s not our fault. Host are fucking slow on setuping new servers because of the holidays.”

Cartels marketplace is much larger than Monopoly market is and checks all the boxes of a site that may perform an exit scam. With over 9000 listings, thousands of vendors, and holds a site wallet along with FE payments.
Since the creation of Cartel back in June 2020, Cartel Marketplaces admin has always been active in both dread and with the marketplace. The site going down for longer than a few hours is extremely unusual and unlike what is expected from the admin.

2 days after the DDoS attack there was still no word and u/Ryuu claimed that the team was still working on this issue. Many users were suspicious and anxious about this issue by this point. Eventually, u/Ryuu returned a final time on January 1st to update everyone that staff members had lost contact with the admin.

“So everyone knows that we got hit by DDOS on past Friday, /u/6ix (The site head Admin) said that only on Monday things will probably be back to normal, and that was the last time we spoke. He is offline for 6 days now. I don’t have access to the backend and I don’t know if something happened with him. But I really believe that some serious shit is going on with him.

I hope it’s not the case. I’ve talked with dread staff and we are going to wait a couple more days because of the holidays to see if something changes.”

Two days later and there is still no word from u/6ix. A dread staff member has shut down the subdread and warned its users to be wary. Many users think something has rather happened to the owner, but it seems this is the end of Cartel Market.

Torrez officially announced their retirement on December 15th, 2021. When users entered the site they received a PGP signed message from mrBlonde, the admin of the site.

The Message from mrBlonde explained that Torrez was closing their doors after 2 years after the market started. Their message was clear, it is not an exit scam and that all orders needed to be finalized and all vendors were to collect their funds. They allowed all customers two weeks to complete everything and lodge any disputes if needed, and finally shut down on December 30th, 2021.

MrBlonde gave some advice for users who would be looking into other marketplaces “While choosing a new market, please use your common sense. I would personally avoid any “established” market as older they get, the bigger chance of collapsing is.
Please give a chance to the smaller markets, which are not that loud as others. This is exactly how we became no 1 – being quiet and doing our job, serving customers 24/7 for 675 fucking days.”

MrBlonde thanked its users and vendors “It has been a great pleasure to work with most vendors and users. We are aware that we leave quite a big gap in darknet markets but we hope most of you will find a new home.” A market retiring is a rare occasion, not choosing to leave with the funds is admirable. The darknets “Honor among thieves”